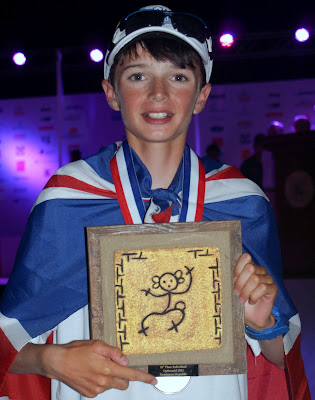 Yesterday after racing we had to hand back the charter boats, two sailors had mislaid some items and not managed to do as asked and put the spares in their labelled ( thanks Steph ) foil bags when we arrived, getting all the blocks and sprit wires off slows down everything and then we had pack the sails and spars we had brought with us and then pack our bags . I am sure the mums will find some un familiar items in the bags . Only two had to be re packed by Carla and various missing items amazingly re appeared after a weeks absence in someone else's room or bag.

Most teams have left although FRA who arrived almost last are spending two more days looking around . All of us very much like to get home to some English or Scottish food and some cold British rain but we understand you are in the middle of a heat wave ..

Our congratulations to go all the team who have worked very hard since selection and Tim and Carla wish them well at the nationals . Tim is back to Tesco and Carla off to help Stog on the 470 course in Weymouth .
Posted by team at 20:10 2 comments:

Yesterday was a light southerly with less shifts than on previous days . It was fair racing . The IODA race officer is making the calls.

The start was very important for generating options for the sailor . It was a tough day for the sailors not feeling well like Martin who fell asleep in his boat before his race but the paracetamol kicked in later.

Max showed consistency picking up places steadily in both races. Martin had a brilliant second race chasing SIN . Both Arran and Jamie were struggling for speed . Milo was unable to " nail the starts" yesterday and did not have his best day.

Dictated by Coach after this morning's coach's meeting

Sorry we have not reported in the team were about to when we had to run for the bus ..yesterday was a bit of right off and the repercussions are such that IODA are taking over the race management today .. as one of the Jury said " we might as well of had a lay day " Red and Green got their race in but the committee boat lost its anchor and there was a two and half hour delay while it was sorted out and then the wind died . Some sailors protested the race committee under rule 27.2 and the Protest committee found in their favour and awarded them redress of the results that they had in that race rather than average points which is what they asked for..

As for our guys ,, Max went down the pan and we hope is back up today , Jamie has had  some of his best results with a 27th and a 20th in the race that was abandoned, Martin put in another keeper , Arran also had a satisfactory day and poor Milo was out there for seven ours and no race at all.

Lots of the sailors not just ours have tummy upsets, nobody is sure why but we seem to be over the worst now. We are on our fifth jar of nutella with the breakfast pancakes, the lunches have taken a dive not sure why , they still have not got a good system for the team water and Gatorade ,, and none of us have worked how the restaurant or bar ordering works ..

But the sun is shining, there is some wind and the boys have launched and are all ready to race..  no sign of Tim's bag .. but there was no wallet in it and Carla has his passport so could have been worse..

Today, should be our rest day but most sailors are glad  to be back on the water as are their team leaders and coaches and parents. It has caught the organisers on the hop because nobody was expecting to be here  and lunch was made in a hurry and the rumour was the race committee was having a lie in but as the PRO was on the bus with us we dismissed that one.

So more drama , Tim's  kit bag with his laptop, phone, camera and all the other junk coaches have, appears to have gone walk about . It was spotted going on a bus but has not been seen since.. he is on the water doing his job while Carla files all the police report and deals with the insurance company etc. other stuff has turned up so we are hoping . Its a bit trying but only a matter of money and not health or anything more serious is the approach we are taking .. we have local phones and Carla's  steam driven laptop and her camera at least. Tim is most upset about loosing his Singapore sun hat and zinc cream that stops  his nose going red

The  sailors have more important things to worry about  than Tim's lost bag and there was a lot of toilet humour and discussion going on in the boat park, this morning  . Carla handing out Imodium tablets like smarties, but as usual there is always one sailor who knows better and much to the amusement of the rest he decided to take his anti constipation pills instead . It was a mistake ..  I will spare you the details but there was a lot of laughter .... so everyone was very relaxed as they set off this morning ..

Off to deal with the police ..

Last night at a nerve wracking AGM the Class voted for the 2014  Worlds in Argentina  in the last two weeks of October . The 2014  Europeans will be in Dublin.
Posted by team at 16:51 No comments:

No sailing today for the sailors so after a slightly later and more leisurely breakfast there were a few catch up phone calls and domestics before the team went over to  the supporters hotel for lunch . Carla stayed here to catch up on the accounts and paperwork and have a tidy up. Later she has to go the club for the IODA AGM where the venues for 2014 will be decided will it be Poland or Argentina or maybe Thailand ??? Argentina could be interesting for us because it is two weeks in October rather than Christmas. Poland is late August and Thailand is early December finishing before Christmas. Lots of proxy s being held for the countries whose reps have gone out for the day . We have the proxy votes for Hungary who want to vote the same way as us . It will be very close.

The team are going to the boat park late afternoon to check over their boats and then back here to look at video and tracking and get themselves back into race mode for tomorrow. Green and Red Flights are one race behind at the moment so our spare day is being used to catch up . Max and Jamie are in Green and Arran is in Red. Milo and Martin in Yellow have done their two races and we have nobody in Blue. We only have done four of a possible 12 races and we have not  reached the only discard yet . We might make 10 races.

Jamie has been a bit " crook" but is now well on the way to recovery . Everyone else is fine so far.
Posted by team at 19:25 3 comments: